Unfortunately, from time to time, we at Dynamic Dads are forced to warn our readers concerning the activities and practices of other organizations. It brings us no joy to issue a rebuke to another organization. However, we are open to others examining Dynamic Dads and if the need ever arises, would welcome investigation into our beliefs and practices. It seems the same can no longer be said for Bill Gothard and the Advanced Training Institute. 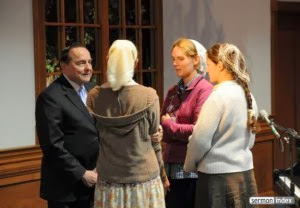 Numerous Christian media outlets are relaying allegations from various families alleging Gothard has secreted away teenage girls to his ministry site in Oak Brook, Illinois. Gothard, never married, stands accused of counseling, holding, touching, kissing, and "mentoring" young women. Witnesses are claiming Gothard spends an inordinate amount of time with these teenage girls forcing others to ask, "why?" Of course men counseling women is no sin. But the Bible cautions against older men "training" younger women (Titus 2:3-4). Of course, Gothard never having married is no crime. (Oprah Winfrey has never married and yet she has made a career of dispensing advice on marriage and parenting.) If evangelicals are going to accuse Woody Allen of improper behavior in this regard then we should not shy away from a complete and thorough investigation of Mr. Gothard who finds himself facing similar rumors. Today, Dynamic Dads calls on the legal authorities in Oak Brook, Illinois, to undertake an investigation into the practices of Bill Gothard and the Advanced Training Institute. These allegations are serious and from all accounts appear to be quite credible. Multiple witnesses are involved and have come forward. Fathers everywhere should seriously consider whether sending their teenage daughters away to "learn" or "serve" at ATI Headquarters is a healthy idea. In addition to legal authorities (local police and local child protective services agencies,) Dynamic Dads calls upon pastors and ministers in the town of Oak Brook, Illinois to thoroughly investigate these serious allegations which have arisen against Mr. Gothard. As far as we understand, Mr. Gothard has not been arrested or charged in a court of law. By all accounts the ATI Ministry operates under a cloud of secrecy. Bill Gothard has built a reputation of acting on his own apart from the local churches and parishes he purports to serve. However, the court of public opinion has looked into these credible stories and found Mr. Gothard wanting. He should come forward and completely open his ministry activities to the light of day. Nothing less will quell these rumors and allegations. It's the least he can do for the families he attempts to serve.
Posted by Paul Pettit at 9:01 AM