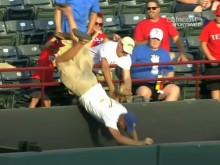 A fan reaching to catch a ball died after he fell over the left-field wall at Rangers Ballpark in Arlington during the second inning of Thursday night’s game.

The man had been reaching over the rail for a foul ball tossed into the stands by Rangers left fielder Josh Hamilton  during the game against the Oakland A’s.
The city manager of Brownwood confirmed that the man, Shannon Stone, was a firefighter there, the Brownwood News reported late Thursday.
Stone, who was sitting in the left-field lower-level reserved seats, fell about 20 feet in the area behind a wall supporting a scoreboard.

“We are deeply saddened to learn that the man who fell has passed away as a result of this tragic accident. Our thoughts and prayers are with his family,” said Nolan Ryan, Rangers CEO and president.

It is routine for players to throw balls that are out of play into the stands.


“As anyone would be, Josh is very distraught about this, as the whole team is,” Ryan said.
Stone was treated by Rangers medical personnel before being taken to John Peter Smith Hospital in Fort Worth.


Ronnie Hargis was sitting next to Stone, who was at the game with his young son. The men had been talking to each other before the accident.
“He went straight down. I tried to grab him, but I couldn’t. I tried to slow him down a little bit,” Hargis said.
Witnesses said the victim’s head was bleeding badly.
David Dodson was at the game with his daughter and saw the fall.
“Just as the ball hit his hand, it kind of threw him off balance and he just went head-first,” Dodson said. “It looked awful because you knew there was no way he was going to land on his feet. … The way he fell, it looked like it was just straight on his head.”
Oakland relief pitcher Brad Ziegler said he thought Stone was going to be OK after the fall because he was telling medical personnel to “please check on my son up there.”
Posted by Paul Pettit at 10:49 AM

Email ThisBlogThis!Share to TwitterShare to FacebookShare to Pinterest
Labels: "Please check on my son up there"
Newer Posts Older Posts Home
Subscribe to: Posts (Atom)