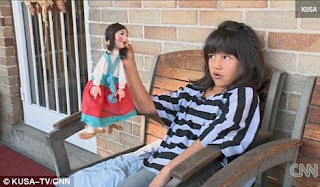 Bobby Montoya, 7, is allowed to dress like his sister and play with dolls. Now, he wants to join the Girl Scouts, do you believe he should be able to join?
A boy in Colorado wants to join the Girl Scouts
What does it take for an anatomical boy to be enough of a girl to join the Girl Scouts?
The question came up recently when 7-year-old Bobby Montoya -- a long-haired, Bratz-loving, biological boy -- asked his mother to sign him up for a Girl Scout troop near his Colorado home.
The troop leader said no. So Bobby's mom, Felisha Archuleta, went to the media -- telling a local television station that her son has loved "girl stuff" since he was 2, and that the troop leader's decision to reject him had left him devastated.
"I said, 'What's the big deal?' and she says, 'It doesn't matter how he looks, he has boy parts; he can't be a Girl Scout,' "Archuleta told Colorado's 9 News.
But in fact, Girl Scouts of Colorado does allow people with boy parts to join its troops, as long as the child is truly transgendered -- meaning the child identifies as a girl, and the family identifies the child as a girl.
"We feel it is important to include all girls, so when a family says, 'This is my daughter and she wants to be a Girl Scout,' we are not going to question that," Rachelle Trujillo, vice president of communications for Girl Scouts of Colorado told The Times.
"The troop leader in this case was confused because the mom was confused," Trujillo said. "She did not say, 'This is my daughter.' She said, 'This is my son and he wants to be in Girl Scouts,' and we don't accept boys in Girl Scouts."
Trujillo said the Girl Scouts of Colorado has only started encountering transgendered children asking to join Girl Scouts in the last three or four years. Since then, she said, her office hears about one or two such cases a year.
"It's still a very small population," she said. Girl Scouts of Colorado has more than 30,000 girls.
As of Friday morning, Trujillo said the troop leader was still waiting to hear back from Archuleta about whether she wants to sign Bobby up.
"If she does want Bobby to join, they need to make a decision, that as a family, that we are going to entirely have her live her life as a girl," Trujillo said. "If they do so, we are happy to have her as a member."  Source: LA Times
**********************
Dynamic Dads believes it is best for girls to join the Girl Scouts and boys to join the Boy Scouts. What do you believe?
Posted by Paul Pettit at 2:50 PM