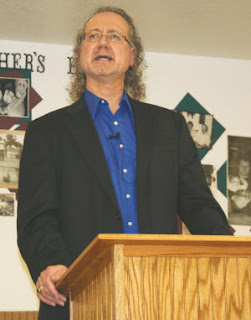 As a licensed counselor, Mark Bradley Morrow sees a number of women who are emotionally distraught due to abortions they regret.
“Tonight, I want you to consider, ‘What about the fathers?’” he said during A Caring Pregnancy Resource Center of Northeast Colorado’s 2011 banquet in Brush Thursday evening.
The pro-life Christian organization brought Morrow from Pennsylvania to Brush to share his perspective on the affects of abortion on fathers.
Morrow said he has been a licensed counselor for a quarter of a century, so he could professionally attest that abortion can have negative consequences for men.
He said the possible symptoms of post-abortion grief include excessive anger, anxiety, panic attacks, mood swings, and feelings of helplessness, confusion, guilt and depression.
Morrow said he is also responsible for multiple pregnancies that were aborted, so he could personally attest to the suffering it can cause.
“I can personally attest to the fact that abortion hurts fathers, and that men can suffer emotionally from the loss of their child,” he said.
Morrow noted that he was probably in good company at the banquet, as statistics show that 25 percent of all women have had an abortion by age 45 and one in six evangelical Christian women have done the same. Since there is a man involved in every pregnancy, he suggested that the same number of men is affected by abortion as well.
Morrow describes himself as a father of eight, though five of his children were never born.
While in his late 20s, he said, he was responsible for four pregnancies in less than two years. Each of the pregnancies was terminated, and he didn’t even know about two of them until the abortions were finished.
“I take full responsibility for my past sins and the horrible consequences, and there really is no one else to blame but me,” he said.
Morrow said he did not talk about the abortions for 18 years, fearing that his life would fall apart if he revealed his secret.
He eventually married a single mother on the condition that he would first have a vasectomy, vowing to never have his own biological children.
After fathering his new adopted daughter for several years, however, Morrow decided to have the procedure reversed. He said his wife became pregnant shortly thereafter, only to lose the pregnancy to miscarriage.
“What I never wanted in the past, now I wanted it, and I lost it,” he said. “And little did my wife know that that was the fifth child that I lost.”
Morrow said he was relieved that he and his wife have since had two healthy children, though he can’t shake the memory of the five that weren’t born. He said he often imagines where they would be now if the pregnancies weren’t terminated.
Morrow said his marriage nearly unraveled when he revealed his secret to his wife, though he now challenges post-abortive men and women to “make their own bold move and begin their journey toward healing.”
In 2010, the local pregnancy center worked with three clients who were originally seeking abortions, said Director Jan Loesch. After being counseled at the center, she said, all three clients went on to have healthy babies.
Loesch said the three clients were among the 111 females and 10 males the pregnancy center served in 2010.
She said the center offers a variety of services and resources, including assistance for pregnant women and girls, along with their partners.
Through a letter read by the director, a young client named Mayra explained how Loesch helped her through a high-risk pregnancy that threatened the lives of her and her son. Due in part to the pregnancy center, she said, the baby was born and both are doing well.
“I had no support from my parents,” she said in the letter. “Thanks to Jan at the center, I was able to get the prenatal care that I needed.”
The pregnancy center also teaches an abstinence class for local students, which has recently expanded from Fort Morgan and Yuma to Wiggins and Holyoke. The class was also recently introduced in area middle schools, she said.
Since she went to work at the pregnancy center nine years ago, Loesch said, Morgan County has dropped from No. 1 to No. 7 in the rankings for the highest teen pregnancy rates in Colorado.
“My goal is to put the center out of business because there’s no teen pregnancy,” she said.
Posted by Paul Pettit at 12:50 PM