As family reunions go, it is sure to rank among the less conventional. Six teenagers across America conceived from the same sperm donor have finally met their biological father after he decided to reveal his identity.
Jeffrey Harrison, whose offerings once ranked among California Cryobank’s most sought-after specimens, made himself known after reading a newspaper article about two teenage girls who had found out they had both been conceived with sperm from “Donor 150” – and wanted to get in touch with the man in question.
With a profile billing him as a blue-eyed, 6-feet-tall lover of philosophy, music and drama, Mr Harrison, now 50, made $400 (£200) a month as Donor 150 with his twice-a-week donations in the late 1980s.
But 15 months ago he “choked on his coffee” when he read an article in The New York Times carrying the headline: “Hello, I’m Your Sister, Our Father Is Donor 150.”
Initially, Mr Harrison was reluctant to come forward, fearing that his newly-found offspring would be disappointed by his unconventional lifestyle and humble existence living with his four dogs in a motorhome near Venice, Los Angeles, where he earns a “meagre living” doing odd jobs.
And in any case, he says, he hit a stumbling block, with California Cryobank – which promises anonymity to its customers and donors - not responding to his requests for help when he first read the article.
But this year, as Valentine’s Day neared closer, he finally went online to the Donor Sibling Registry website, where Danielle Pagano and JoEllen Marsh had met, only to discover that four more teenagers conceived with Donor 150’s samples had since surfaced.
“It’s a short life and these children need to have some kind of resolution,” Mr Harrison told The New York Times. “I thought I could send a little Valentine, kind of, to everyone, just saying hello.”
On Saturday, he confirmed his identity to the website, which helps donor-conceived offspring find their sibilings, leading daughters Danielle and JoEllen to call him together the next day.
He met a third daughter, Ryann, in Los Angeles yesterday, and has been in touch with his other children by e-mail, finding out that they shared a love of animals and a distinctive forehead.
“The first thing he said was, ’Holy moly’,” Danielle, 17 told the newspaper. “He’s sort of a free spirit, and I don’t care what career he has. I got to talk to his dogs.” She has since spent several hours on the phone to her newly-discovered father.
Mr Harrison has also been able to enlighten his children, who live in Colorado, Florida, New York and Pennsylvania, with some paternal family history. Their grandfather was an Ivy League-educated retired financial executive, while their grandmother used to be volunteer president for the Society for the Prevention of Cruelty to Animals.
Wendy Kramer, founder of the Donor Sibling Registry, said that several dozen donors had contacted offspring via her website, but until now none had been brave enough to take on such a large group of teenagers.
“You don’t know what to expect,” she said. “How do we define this family, and what are we to each other?”
The story may not end there. It is possible that Mr Harrison has other children, because women who buy sperm are not required to report when they have a baby.
Posted by Paul Pettit at 11:59 AM 2 comments:

Email ThisBlogThis!Share to TwitterShare to FacebookShare to Pinterest
Labels: Is this the family of the future? 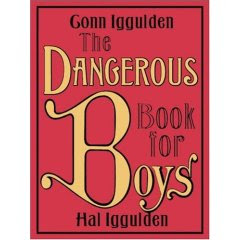 Here is the cover of a hot new book, which was a best seller in England and is now making the best seller lists here in the US. Check out this list of "boy" activities:

Book Description:
A bestselling book for every boy from eight to eighty, covering essential boyhood skills such as building tree houses, learning how to fish, finding true north, and even answering the age old question of: what is the big deal with girls?
In this digital age there is still a place for knots, skimming stones and stories of incredible courage. This book recaptures Sunday afternoons, stimulates curiosity, and makes for great father-son activities. The brothers Conn and Hal have put together a wonderful collection of all things that make being young or young at heart fun—building go-carts and electromagnets, identifying insects and spiders, and flying the world's best paper airplanes.
The completely revised American Edition includes:
The Greatest Paper Airplane in the World, The Seven Wonders of the Ancient World, The Five Knots Every Boy Should Know, Stickball, Slingshots, Fossils, Building a Treehouse, Making a Bow and Arrow, Fishing (revised with US Fish) Timers and Tripwires, Baseball's "Most Valuable Players", Famous Battles-Including Lexington and Concord, The Alamo, and Gettysburg, Spies-Codes and Ciphers, Making a Go-Cart, Navajo Code Talkers', Dictionary, Girls, Cloud Formations, The States of the U.S., Mountains of the U.S., Navigation, The Declaration of Independence, Skimming Stones, Making a Periscope, The Ten Commandments, Common US Trees, Timeline of American History.