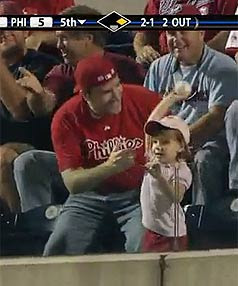 Everyone's talking about Phillies fan Steve Monforto who was patient and kind with his little daughter, Emily. Watch the video by clicking on the link below to see how this Dynamic Dad reacts to his young daughter's impulsive act...that's one forgiving father!
http://tinyurl.com/ral7jr

Here's how the AP wrote up the story:

Dad could not believe his good luck. Steve Monforto made a great grab, catching his first foul ball after years of going to Phillies games. He fist-bumped his buddies, high-fived his 3-year-old daughter and then handed her the prize. Big mistake. Little Emily threw the ball over the railing.
Stunned by his toddler's toss this week, all Pop could do was hug her.
"I didn't want her to think she did anything wrong," Monforto said on WIP-AM radio.
Philly crowds are known for being a tough bunch, but everyone at Citizens Bank Park cheered - first his catch, then his cuddle.
"This was the true reflection of what Philly fans are like," Bonnie Clark, the team's vice president of communications, said.
Cameras captured the scene of Monforto reaching over the railing and snagging Jayson Werth's foul in the fifth inning against Washington.
The video was displayed at the top of the Yahoo! Web page and made the NBC national news. The entire family is scheduled to appear on the "Today" show tomorrow.
Monforto and his daughter still went home with a baseball. A few of them, actually.
Phillies general manager Ruben Amaro Jr. and three team employees saw what happened and each grabbed a ball and went up to the stands.
"He was very appreciative," Phillies executive Mike Stiles said.